She works with the 9 classic color collections by Benjamin Moore Paints, the 75 new Ben Moore Century Colors, and the 132 colors by Farrow & Ball. She has completed interior and exterior color projects, large and small, for more than 750 buildings.

Barbara Hagendorf Mayfield has enjoyed a long professional career in the visual arts as a painter, printmaker, theatrical set designer, and muralist.

She studied art and design for two years at Tyler School of Art and is graduate of the Pennsylvania Academy of the Fine Arts. She was awarded the J. Henry Scheidt Traveling Scholarship upon graduation from PAFA and spent ten weeks in Europe and Mexico soaking up the art in each region.

Mayfield was part of the first 4-person team at the Philadelphia Museum of Art Community Programs Department, working with artists Clarence Wood and Don Kaiser, the two dynamo artists who brought mural arts to the city of Philadelphia, and Susan Mayr. Mayfield assisted on more than a dozen murals over a 2-year period.

For many years she worked as a freelance muralist and theatrical set designer. Her paintings, mixed media work, and monotypes have been represented by fine galleries in Philadelphia, New York, Washington, D.C., and on Canyon Road in Santa Fe, New Mexico. Her work is in private and public collections throughout the USA and the world.

Born and raised in Philadelphia, she lived and worked in Santa Fe, New Mexico for 21 years. She is currently based in Penn Valley, 8 miles from the Liberty Bell in Philadelphia. Pinterest.

My imagery intends to tell stories. I am most moved by the Natural World and the Beings within it and of it. The series The Beginning of Time, At the Edge of the World, and Seeds are about the time before Time, of thoughts coming into Form. In the series Queens, Witches, Selkies and Souls I’m after images of the Divine Feminine. I primarily use iconic images of birds, huts and casitas, slivers and seeds, and a stylized female form. I believe in the magic and power of color. I work with oil on canvas, paper and panel, with oil-based inks on the monoprints & monotypes on paper, and sometimes with acrylic on paper and panel. Watercolor, gouache, colored pencil and pen, and paper collage are favorite media.

Trained and certified in Aesthetic Education in the Lincoln Center Method. Developed and conducted series of classes for fifty teachers as a Teaching Artist at the 2002 Summer Institute for Public School Teachers. Created lesson plans, taught and provided evaluations as Teaching Artist for public elementary school. 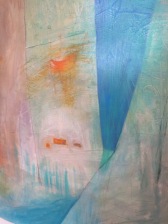 Life in the Canyon, from the Land of Enchantment series. Approx 54×60 mm on Arches paper ©2018 Barbara Mayfield

Birds By the Stream 26×24 o/c. From the series My Pennsylvania Garden. ©Barbara Mayfield 2017 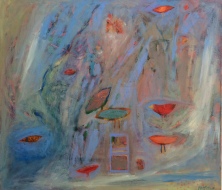 The Garden Gate Birds, 26×24 o/c. From the series My Pennsylvania Garden. ©Barbara Mayfield 2017

The Lupine Came Up 26×24 o/c. From the series My Pennsylvania Garden. ©Barbara Mayfield 2017

The “Garden” paintings on display for an open studio day. 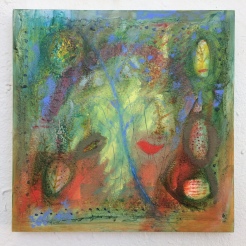 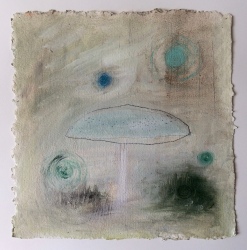 In the Forest. Acrylic on Handmade 100% Cotton Rag paper on panel. ©Barbara Mayfield 2014 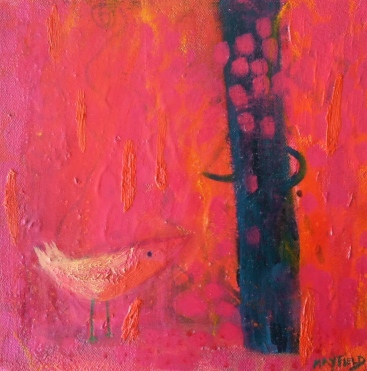 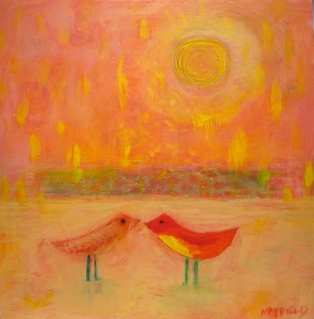 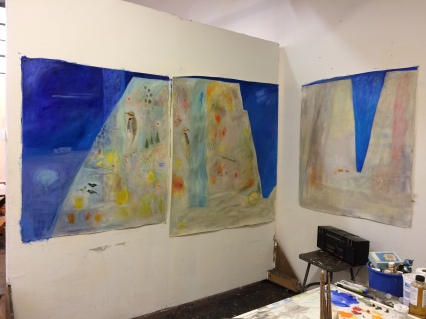 The first Land of Enchantment paintings on display for an open studio day.

Land of Enchantment paintings on display for an open studio day. 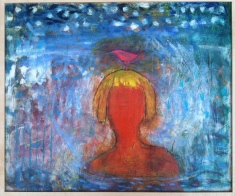 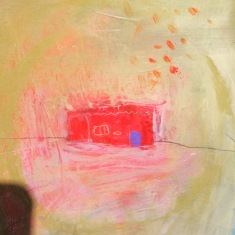 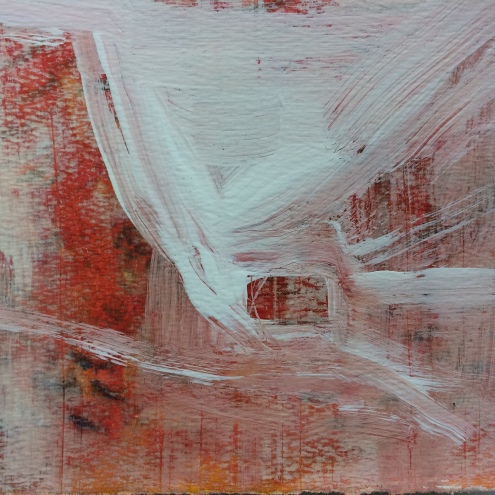 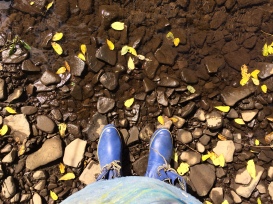 I love a creek. 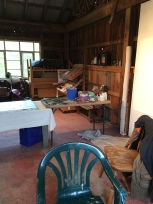